In 1984 Shaune Ritchie was fifteen and still at school. Like many teenagers he had a part-time job – in his case working as a stablehand for his father Frank, mucking out boxes and riding work.

One afternoon, while working at the Ellerslie yard, he was told that a new horse had arrived earlier in the day and because Frank’s full-time staff had already picked their teams to strap for the season the new arrival would be his. An inspection of his new and sole team member brought Shaune Ritchie face-to-face with the horse that would set his career path in stone. Bonecrusher had arrived.

Within three months Shaune had left school and was on the ride of his life. Fast forward 25 years – and acknowledge a fair amount of blood, sweat and tears in between – and Shaune Ritchie is now at the top of his game.

Completing his most successful season ever in 2009/10, Shaune became just the third trainer – behind the legendary Colin Jillings and Dave O’Sullivan – to win the NZ Derby and NZ Oaks in the same season.

Add a New Zealand Cup, a Desert Gold Stakes and a Metropolitan Trophy to the mix and Ritchie’s five-win stakes haul banked him as New Zealand’s leading stake-money earner for that season.

Shaune, who has most definitely inherited the Ritchie ‘way with people’ and natural horsemanship, attributes his ability to attract and retain a loyal client base as one of his greatest assets. 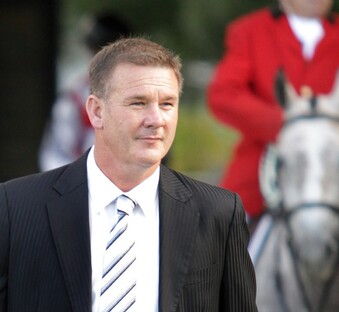 Prominent owners Gerard Peterson, Windsor Park Stud, Mick Dittman and Sir Patrick Hogan are among his stable of owners as is a powerful presence of Hong Kong based businessmen.

Shaune prepared the Hong Kong Gr.1 winner Thumbs Up prior to his NZ departure, and similarly the NZ Derby winner Military Move left the Ritchie stable with the perfect start to his career en route to Sha Tin.

With this level of international repute, and a stable of consistent performers to frank his winning form, Shaune remains firmly focused on being one of New Zealand’s best trainers.